Hyphen Hub was selected to guest curate the visual arts section of the 2018 International Festival of the Image, the internationally renowned digital and electronic arts exhibition held each year since 1997 in Manizales, Colombia.

This year’s festival—with the theme New Expeditions—once again became a platform for some of the world’s leading artists, scientists, designers, and creative technologists to showcase new work and exchange experiences and knowledge through a variety of events, performances, installations, and presentations.

While in Djibouti, Biggs witnessed Yemeni refugees fleeing the bombing and devastation in Yemen. They risked everything to cross the Gulf of Aden in shoddy boats, to arrive at Camp de Markazi in Obock, a desert tent city subjected to furious sand storms and temperatures of up to 134° Fahrenheit. At the same time, she saw and filmed migrant Ethiopians fleeing their country’s oppression and poverty as they braved a four-day walk across the desert of Djibouti. The Ethiopians arrived at Obock to take the same boats back across the Gulf to Yemen. With only threads of clothing hanging off their backs, the Ethiopians didn’t all survive the journey. Their water supply often ran out before the desert did. Hope is persistent.

At the other end of a spectrum of human movement in pursuit of hope and new possibilities, there are scientists working in the desert of Southern Utah. Daily, they don spacesuits or “sim suits,” exit the airlock of their habitat, and head off on EVAs to collect data in the hope of someday doing the same on Mars. The Mars Society has constructed Mars Analogue Research Stations here on Earth. We have already sent information-collecting robots to Mars, and predict that it’s only a matter of time until the first human landing. In preparation for this event, simulation astronaut crews conduct missions at remote locations on Earth that closely resemble the terrain of the red planet. The persistence of hope is endless.

Shimon Robot, a marimba-playing robot, was created at MIT by Gil Weinberg and now resides at Georgia Tech’s Center for Music Technology. Shimon’s cutting-edge artificial intelligence can analyze aural and visual input to make sophisticated, improvised musical choices as he plays. Shimon composed and played the score for the video projected at the performance. Combining footage of a Mars simulation mission (filmed by Biggs, while wearing a full simulation space suit as a member of crew 181), with images taken by Hilal Osman, a Yemini refugee living at Camp de Markazi (Biggs supplied video cameras to refugees at the camp), and footage of Shimon Robot as he composes and plays a score for the video, Biggs merges personal experiences and events witnessed with memories and first-person narratives in Space Between Fragility Curves. 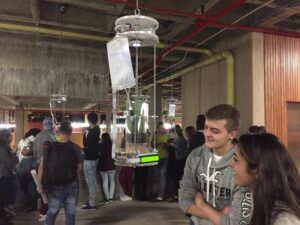 ​The series Reversal of Fortune uses the metaphor of a garden and its struggle to survive to explore the complex relationship of economic growth to human life – between the cultural and the organic. The artworks focus on how social media platforms, specifically online crowdfunding, are facilitating new forms of charity-based micro-lending. Through a collection of interactive artworks, videos, and drawings, the series asks: What are the underlying mechanisms that enable these new networks to emerge? How do these platforms shape the affective dimensions of empathy-at-a-distance and drive us to donate? In evaluating the actual impact of these systems on their borrowers, can we move closer towards a true digital commons?

The techno-social rhythms of social media and philanthropy are animated in Planthropy. In this interactive installation, lights immerse the viewer in a garden of illuminated hanging planters constructed from clear plastic tubing. The effect is suggestive of a strange bio laboratory setting. The planters respond to Twitter posts about why people donate. Each Wi-Fi-enabled planter is equipped with an automated watering system connected to a small LCD display and speakers. When a Twitter post is received it activates the system causing the plant to be watered followed by a scrolling message on the LCD display about what drives that person to donate — “I donate because it’s sexy”, “I donate because I’m a post-human”, “I donate because I’m luckier than most”. The computer speaker reads the message aloud. The result is a global “heartbeat” of flickering messages and synthetic voices emoting the feelings of lenders from around the world. 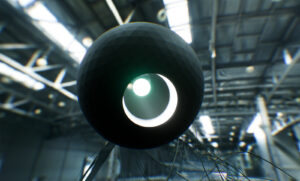 Pando Endo is a virtual organism simulated in real-time. It is a root system, a plant, and an infrastructure. It was developed from phone photographs of aspen tree bark, moss, and roots. These photographs were converted into digital textures, programmed to morph together with a procedural system that functions as a root system.

Four drones fitted with spotlights circulate the virtually simulated organism, examining it, zooming in on its movements. The organism has been tasked to breach virtual glass cabinets and taught to gauge and mobilize towards light sources. Textures crawl across its surface area and liquids trickle along its tentacles like clustered organic entities. Based on this programming, the root system has found its own navigation. It resists stationary exhibition to spread and traverse the vast empty space in the empty warehouse and exposition hall.

The organism takes its first name from the great Pando (Latin, “I spread”), a clonal colony of aspen trees estimated to be 80,000 years of age, resiliently surpassing the age of agriculture and the irreversible transformations of land masses by human interactions. The Pando has 40,000 trunks, weighs 6 million tons, and spreads across 106 acres. Every tree is identical in DNA and connected to a single root system. As an organism, the Pando is a slowly moving creature capable of expanding our concepts of the natural, from vast open landscapes to the covert enormity of this individual living entity that is partly obscured underground.

For the Festival de la Imagen, the project was converted into a four-screen video installation, with each screen showing a unique video recording of a virtual camera examining the digitally simulated plant, with audio from each of the four monitors mixing in the exhibition space to create a single immersive environment, but without a virtual reality headset.

Walking on the cloud consists of legs, built with plexiglass and servomotors, which move electronically simulating the “walking” on a cloud recreated through an artificial ultrasonic nebulization.

The rendering is totally evocative and underlines how the mechanics can create possibilities of thought to dream new future possibilities. The exposed legs are artificial and try to define human behavior. Every movement is causal to another movement. For each cause, there is an effect.

Barbara London: Barbara London is a curator, consultant, and writer based in New York who founded the exhibition programs and video collection at the Museum of Modern Art, where she worked from 1973 to 2013. She was a pioneer in tracking the development of media art since its inception and has guided the field to its current position as a sophisticated form of artistic production. During her tenure at MoMA, she oversaw the acquisition of more than 500 works of multimedia art, including installations, videotapes single-channel, and music videos.

Marc Routh: Marc Routh is a prolific producer on Broadway and in his role as President of Broadway Asia, the premiere producing company for Broadway productions in Asia. Recent Broadway productions include Oklahoma! (Tony Award, Best Musical Revival), Angels in America (Tony Award, Best Play Revival), The Band’s Visit (Tony Award, Best Musical), and The Producers (12 Tony Awards, the most Tony Awards for a single show in Broadway history). He is the producer of off-Broadway’s Stomp (Drama Desk Award and Obie Award for Unique Theatre Experience, Legend of Off-Broadway Award) and 54 Below, Broadway’s award-winning nightclub. He is Professor of the Department of Performing Arts at Brooklyn College, NY, where he has 25 years’ experience teaching “Business Management for the Performing Arts.” He is the recipient of the Robert Whitehead Award in the category “Outstanding Commercial Theater Producer” and has been included in NYU’s Entrepreneurs Hall of Fame.

Mike Stubbs: Mike Stubbs is the Director of FACT (Foundation for Art and Creative Technology) Liverpool, a place where art, people, and creative technology meet and the leading organization in the UK for the launch and presentation of new forms of multimedia art and deep social commitment programs, as well as talent development linked to the creative industries. Stubbs was appointed to FACT together with Liverpool John Moores University in 2007 as Professor of Art, Media, and Curating. He was previously Head of Program ACMI (Australian Center for Moving Image), Melbourne and Visual Research Center, Dundee, Scotland.

The central theme of the 2018 Festival was “New Expeditions”, a concept that departs from botanical expeditions performed centuries ago by researchers who laid the foundations of science and culture of the 21st century XXI. Through a series of installations of virtual reality, augmented reality, video art, robotics, artificial intelligence, electronic music performances, academic discussions, and presentations, the New Expeditions theme focused on contemporary global issues of poverty and inequality and man’s provoked changes in the environment. Artists, creators, and academics explored some of the tools we need to observe, understand, and utilize to navigate our world’s rapidly changing landscape. Only a creative, multidisciplinary, and inclusive approach will enable us to find routes towards creating a sustainable balance between man and nature and create a future of well-being, dignity, equity, and peace around the world.